A concept by Pierre-Emmanuel Michel

To write the name of Liberty,
give me your voice, my friend
A photographic, poetic, individual, collective experience.

Share cultures with a visual poetry of different languages from the Philippines islands and the french motto Liberté Egalité Fraternité.

Words are composed with a photographic alphabet made of volunteers' mouths during a french artistic event in Oloron-Sainte-Marie, the Revol'ution.

Like a tribute to our global diversities, to what unites and separates us, to the founding values of the Universal Declaration of the Rights of Man, issued from the French Revolution, tell with the "voices" of the Oloron Revol'utionnaires the motto Liberty, Equality, Fraternity in a selection of Philippines islands' languages.

If in metropolitan France remains a few regional languages (alsacian, basquian, bearnese/occitan, britain, corsican, ...) the french is spoken by all. In the Philippines archipelago, despite a national language, the Tagalog, 150 languages and dialects, some indigenous, are still spoken, among them 8 majors, Tagalog, Cebuano, Ilokano, Bikolano, Hiligaynon, Waray, Kapampangan, Pangasinense.

The exhibit is composed of graphic compositions printed in various size, echoing with a 2 minutes mute video animation looping. 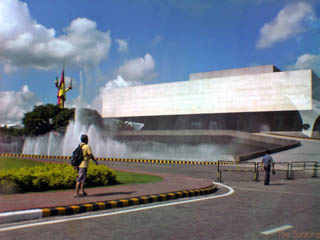 Kalayaan (...) Kapatiran presents as a wide fresco during a month in the theatre lobby of the Cultural Center of the Philippines (CCP) in Manila. Rendez-vous March 7 starting 2pm for the artist's talk followed at 4pm by the official opening of the exhibition, free entrance, be welcomed.

Initiated for the 3rd Revol'ution in Oloron, a new episode of the project, as a video, is shown during the 4th edition of this artistic event.

During the Revol'ution, an artistic event involving the studio/galleries located in and nearby Revol Street in Oloron-Sainte-Marie (french Pyrenees), almost 40 volunteers played models at my Existences space for an informal photo session. Each of them pronounced a letter in the alphabetic order. The result is the visual alphabet made of forty or so mouths.

The Declaration of the Rights of Man and of the Citizen, initiated in 1789 with the French Revolution tells :

"Liberty consists of being able to do anything that does not harm others: thus, the exercise of the natural rights of every man or woman has no bounds other than those that guarantee other members of society the enjoyment of these same rights. (...)
The law "must be the same for all, whether it protects or punishes (...)
and without other distinction than that of their virtues and talents.(...)
Do not do to others what you would not want them do to you, do constantly to others the good you would like to receive."

After the Cultural Center of the Philippines exhibit, the CCP Arts Education Department will bring the 20 x 2.5m fresco to their outreach program in Samar and Tacloban. The project is to recycle it for people in need after Hayian/Yolanda supertyphoon.

Flashback to the project on existences.info

You can host an exhibition of the concept, feel free to contact me.

Spread global human values with the "voices" of the filipinos volunteers captured during the CCP exhibit opening, march 7th, 2014.

Please use this contact form if you have questions, comments, ...

To write the name of Liberty,
give me your voice, my friend